The Oval Tower is located in the center of Platinum Jail, behaving as its symbol, and serves as the headquarters of the Toue Corporation.

Oval Tower is an unavoidably large building brightly serving as the focal point of each area in Platinum Jail. It seems to be well known among the people of the Old Resident District. It's name comes from the shape of the tower resembling an oval. Inside of it are many rooms, shown to be extremely large. This is where the climax of the route and the scraps of each character take place. At the end of each route the tower is destroyed and resembles the end of Toue's schemes. 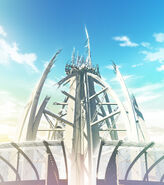 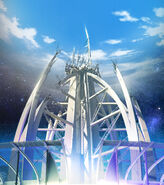 Back entrance to tower

Rubble from tower
Add a photo to this gallery
Retrieved from "https://dmmd.fandom.com/wiki/Oval_Tower?oldid=11039"
Community content is available under CC-BY-SA unless otherwise noted.