Midorijima (碧島) is the main setting in DRAMAtical Murder. It's located southwest of the Japanese islands. Its name translates to "green island".[1]

The Old Resident District is where the game begins and in some cases ends. Aoba informs that it does not have much of a transportation system and that the only kinds of transportation available (i.e. taxis) tend to get delayed every so often and roads may be blocked. Because of this, the citizens mostly get to where they need to go by foot. The Old Resident District is divided into North, South, East and West.[1]

Further to the North district lies Platinum Jail, a giant amusement facility built by Toue Inc. One cannot enter it unless invited, or by paying large amounts of money in order to get a ticket. Platinum Jail is separated from the Old Resident District by a giant wall. The weather and daytime is controlled manually in Platinum Jail, and is always set on night time, so guests are able to party at all times. Unlike in the Old Resident District, the sky is very clear and stars are always visible.[1] The Oval Tower stands in the middle of the city and is surrounded by five districts:

It seems that guests receive a luxurious residential building to stay in. The one Aoba stays in is named Glitter and appears the same in each route.

The Eastern part of the Old Resident District. 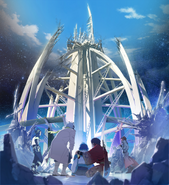 Oval Tower as seen in Ren's Route after Sei initiated its destruction.

Marked off path to Platinum Jail

Alleyway with rhyme players
Add a photo to this gallery

Retrieved from "https://dmmd.fandom.com/wiki/Midorijima?oldid=11035"
Community content is available under CC-BY-SA unless otherwise noted.